Discover the most beautiful ski touring routes in La Rosière

Le Bec Rouge is a summit located between La Rosière and Sainte-Foy, culminating at an altitude of 2515m. In winter, Le Bec Rouge ski touring is a very diversified and authentic route, starting in the villages, the first part of the hike is in the forest, then a wide ridge dominating the Haute-Tarentaise valley until its summit. The descent is also a huge playground with many options to make your tracks!

We will talk here about Le Bec Rouge route starting from the village of Les Moulins. The village of Les Moulins can be reach by car from the road that goes up through La Rosière’s villages, at the level of Le Villaret you have to continue the road towards Sainte-Foy, the village and the starting path are after the bridge on the left. This is where we put on our touring skis at an altitude of 1400m to take the Cavette forest path which runs alongside the Moulins torrent. The atmosphere is quiet and fresh in the morning due to the proximity with the torrent.

This first climb reaches the village of Le Vaz which is also possible to access from Le Chatelard. Once arrived at Le Vaz, we continue our climb towards La Roche. Through the snowy trees, we can see the village of Chatelard and Mont Pourri during the ascent to La Roche.

Reach the top of the Mousselard forest. 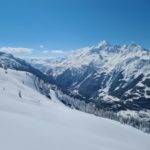 At La Roche, we have to continue by the forest paths to leave the forest of Le Mousselard. Sometimes it is not easy to spot the path if you are on the first track, the main thing is to keep climbing until the forest let place to a more mountainous and open landscape around 2000 meters. The change of scenery is quite obvious, you have now a clear view of Mont Pourri and the entire Haute-Tarentaise valley.

The transition between the forest and the long ridge that leads to Le Bec Rouge.

This is the steepest part of the climb, a few conversions will be necessary to go up the little steep part towards the North-East which permits to join the last part of this ascent by ski touring towards the Bec Rouge. It is also the place where awareness  must be the most important because it is a part with slopes sometimes steeper than 30 °. If the visibility is not good, it is before this part that we advise you to give up, because afterwards there are no more trees to find contrast!

The breathtaking ridge that leads to Le Bec Rouge.

Once the steepest part is behind us, all that’s left is this wide and beautiful ridge to the top. Nevertheless, there is still some distance that should not be overlooked! However, the 360 ​​° panorama which allows you to observe La Rosière, Sainte-Foy, Les Arcs as far as Val d’Isère and the summit, will make you forget that your legs are getting heavy.

You have reached the summit of Le Bec Rouge by ski touring at 2515m!

For the descent, several routes are possible depending on your level and your experience. During the ascent it is possible to observe the descent route, in particular the most obvious and less steep descent, exposed North-West. You also have the option to chose a steeper slopes between the rocks facing North or for locals and experts of steeper slopes to switch to the side of Sainte-Foy to reach the Miroir. For all downhill routes, do not underestimate the avalanche risk, right down to the bottom of the valleys! Once you have went down the North-West face, the most obvious, you will arrive in the at the valley of Piche. From this point, you will have to slalom between trees and the Nant du Piche torrent to Petit Bois and Le Vaz. This last part is probably the most technical of the descent with a lot of obstacles so keep some energy until the end!

Access: From the village of Les Moulins at 1400m on the climb to La Rosière

Starting point of the hike: The path of La Cavette next to the bridge in the village of Les Moulins.

Intermediate point: The summit of the Mousselard forest at an altitude of around 2000 meters.

Summit: Le Bec Rouge at an altitude of 2,515 meters

Return: By the North-West Face and the Piche valley to Petit Bois, then take the Cavette path again along the torrent to finish to the starting point.

Come and discover this ski touring route with our qualified instructors!